Hello again readers, 2018 is rapidly drawing to a close and I’m making an early new year’s resolution to update this blog more often, it is called ‘endometriosis update’ after all and I feel I haven’t been doing enough updating.

I recently had the pleasure of being invited to the Endometriosis Research Now! Conference in London organised by Endo UK, the World Endometriosis Research Foundation and supported by the Wellcome Trust. I gave a talk on the way in which scientific evidence about endometriosis is portrayed and how we can critique this evidence (pretty much everything I covered in this post from earlier in the year). It was a great day meeting other endo specialists and hearing the voices of women with endo to learn more about what I can do to further awareness. More on that to come in a later blogpost though when all the promotional material has been sorted by Endo UK.

For the subject of this post I’m going to talk about a recent study analysing the results of bowel surgery in women with endometriosis. You can read the full text of the source article here for more detailed information about the study.

Some forms of endometriosis can penetrate deep into the pelvic organs, one site in which this can occur is the tissue that divides the vagina and the rectum, called the rectovaginal septum (you can see some common sites of rectovaginal endo here, and learn more in the yellow fact box below). This form of endo can present a particular set of challenges when it comes to management and treatment of the disease. Evidence is mixed concerning the effectiveness of medical therapy for rectovaginal endometriosis, so surgery is often recommended as the preferred treatment choice. But what are the outcomes of this surgery, and how effective is it at managing symptoms of the disease? 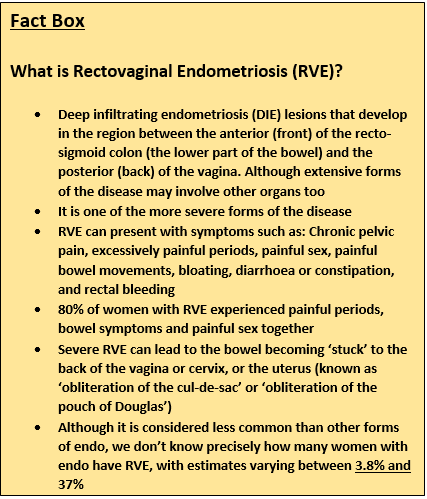 A recent study published in the British Medical Journal examined data from 4,721 women undergoing planned surgery for deep rectovaginal endometriosis between 1st January 2009 and 30th June 2016 in centres belonging to the British Society for Gynaecological Endoscopy ‘Endocentres’ (specialist endometriosis treatment centres where patients are treated in multidisciplinary teams and surgeons audit their outcomes. For a list of such centres, see this link).

The authors of this study recorded a lot of information on these patients, in particular their pain levels, symptoms, bowel functioning, drug treatments, surgery complications, and quality of life surveys called the EQ-5D-3L (EQ5D) and the EuroQoL Visual Analogue Scale (EQVAS). All this data was recorded before surgery and at 6 months, 12 months and 24 months after surgery to see how/if any of those recorded factors had changed.

Let’s get right into the findings, starting with pain symptoms. For this study they asked the patients to rank their pain on a scale of 0-10, with 0 being no pain at all, and 10 being the worst possible pain. 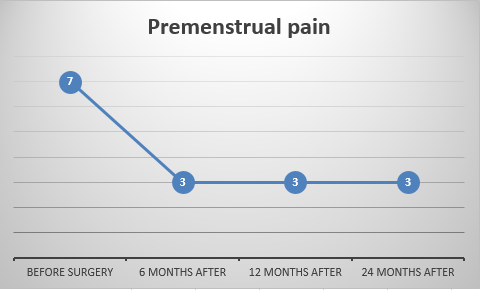 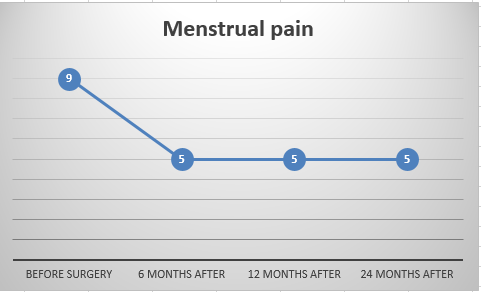 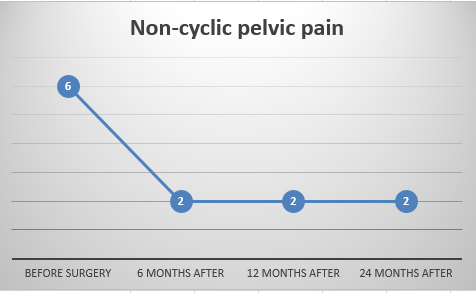 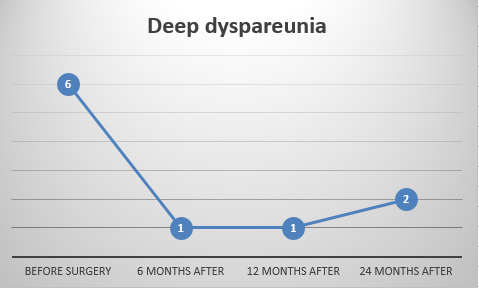 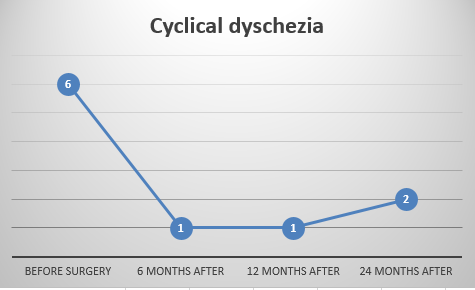 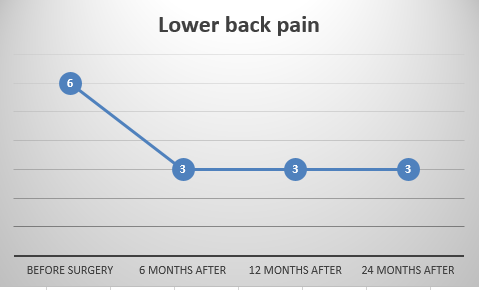 It’s good to see that, on average, the pain scores decreased for all types of pain symptoms after 24 months post-surgery. In particular, cyclical and non-cyclical dyschezia (painful bowel movements) were lowered, although cyclical dyschezia did seem to increase slightly again after 2 years. Whether this represents a return of the disease or not requires further study.

So, pain symptoms are reduced after rectovaginal surgery, does this translate to improved quality of life? The graphs below show scores representing results of the two different quality of life surveys (the EQ5D and the EQVAS). The higher the number of each score, the better the average quality of life.

In both cases these scores increased and remained higher after surgery. This means factors like levels depression and anxiety got better, mobility increased and ability to do daily activities increased too. 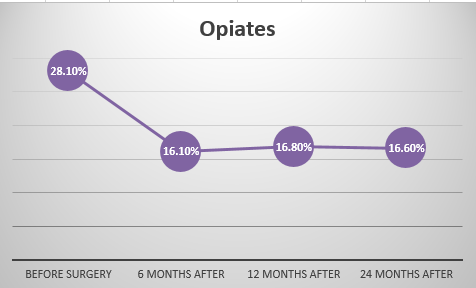 Overall the use of any type of pain medication, on average, fell sharply at the 6 months after surgery point, but crept back up slightly at the final 2 year point. This is consistent with some of the other graphs showing slight pain recurrence at the same 2 year point. While the use of pain medications is reduced after surgery, for paracetamol and NSAIDs their use still hovers in the 50-60% range, meaning more than half of women still needed to take pain medication. Whether the continuing need for pain medication is just due to rectovaginal endometriosis related symptoms, or to other types of endo, or other conditions all together, needs further clarification.

One of the tricky parts of rectovaginal surgery is that it can deal with operating on a particularly challenging organ – the bowel. Your bowels are in pretty heavy use all the time and work hard to move digested food where it needs to go. So operating on this sensitive part of the body can, rarely, result in complications arising during, and after surgery. Below is a diagram showing the percentage of perioperative complications, that is, complications arising during surgeries in this study. 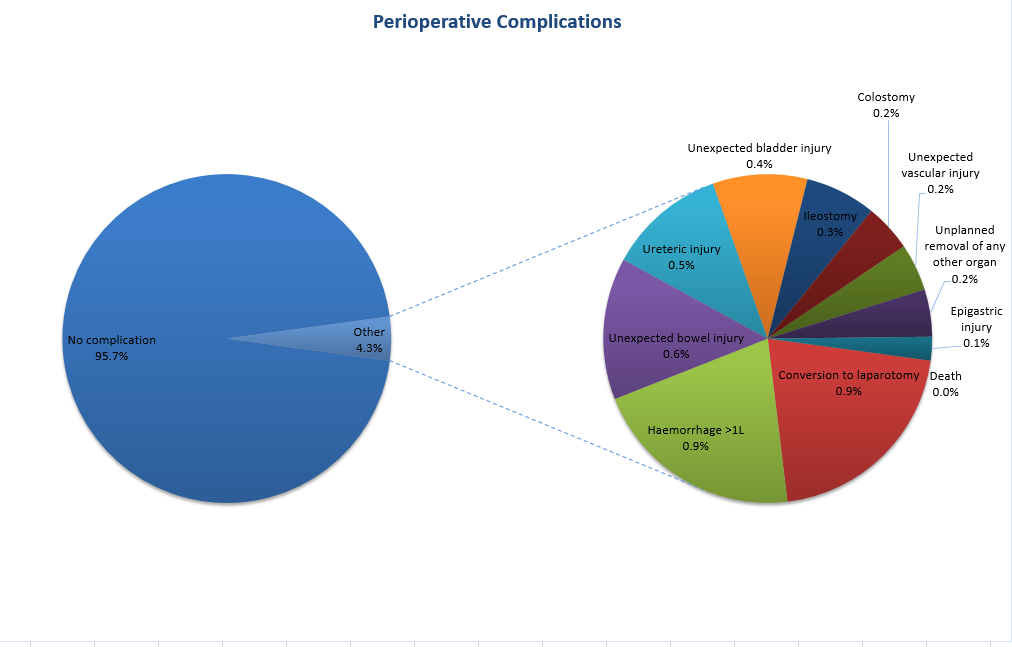 As you can see, the vast majority of surgeries went without complications. Of the few complications that did arise, the majority were unexpected injuries, or the need to covert the laparoscopic surgery to laparotomy. Both of these are manageable by a multidisciplinary team such as the ones used in this study and, although it means further monitoring of patients after the surgery is complete, it wouldn’t necessarily mean the patient didn’t get a good outcome. Again we can see that most women didn’t have any complications after surgery. Of those that did, the most reported type of complications were pelvic haematoma (when blood collects outside the blood vessels), pelvic abscess (as the result of infection), bowel leak (bowel incontinence), and bowel fistula (a hole that forms between one organ to another). All of these complications are manageable as long as patients stay aware of any unusual symptoms after surgery and report them to their doctor as soon as possible.

Of course, not all types of surgery are the same, depending on the type and extent of endometriosis, some will require more complex or extensive removal, and so, have the potential to lead to more complications. The graph below shows the percentage of complications arising depending on whether the surgery involved any bowel surgery at all, bowel shaving (where a thin slice of the bowel surface is removed and any endometriosis excised), disc resection (where a small section of the bowel is cut out), or segmental resection (where a larger portion of the bowel, plus a small part either side of the affected area, is removed and the remaining parts joined back together). 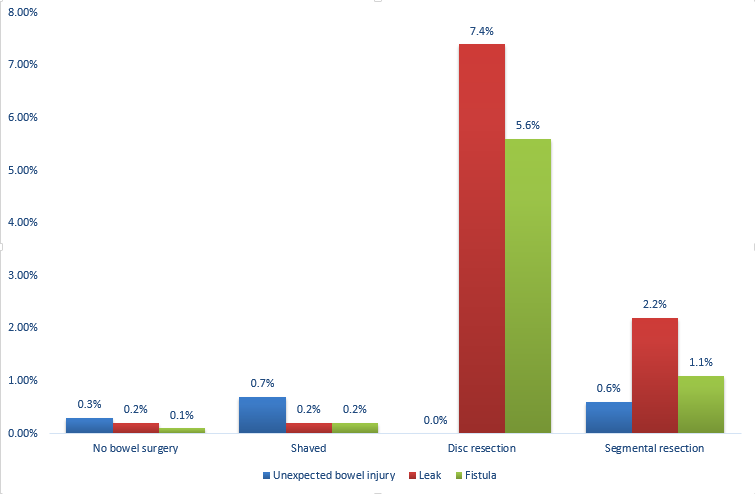 From these results we can see that, although complications were overall infrequent, disc resection and segmental resection had the higher complication rate. This is perhaps unsurprising given that these techniques do involving cutting into and removing part of the bowel, but it is also a testament to how advanced surgery techniques and skills have become that so few complications do occur.

What are the overall conclusions of this study? You can draw your own from the results I’ve shown here, but I think the main take home message is that complex surgery for the removal of endometriosis, especially when it involves the bowel, requires a multidisciplinary team of experienced surgeons. When it is done right, rectovaginal surgery for the removal of deep endometriosis decreases pain scores and symptoms, and improves quality of life over at least a two year period, so women with endometriosis need to have access to these specialist treatment options to effectively manage their condition.

New comments are not allowed.